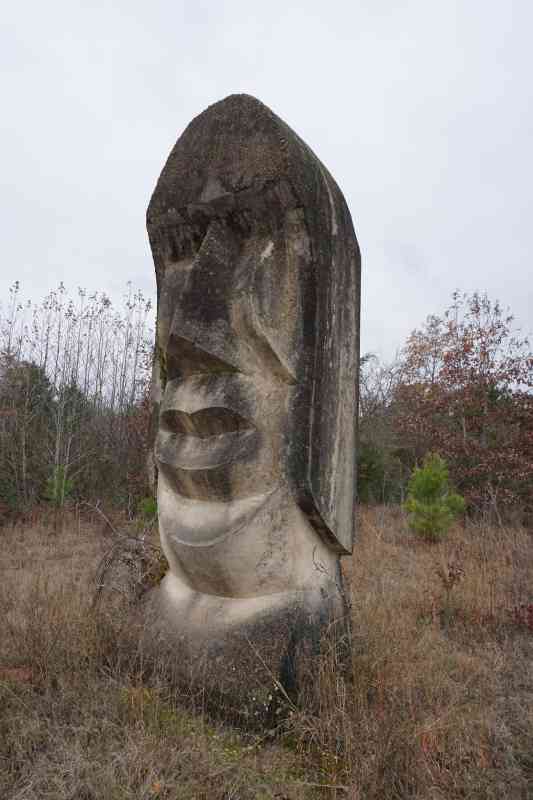 After stumbling over the approximate location of a rarely documented and unique sculpture1 in South West Arkansas, I tried to triangulate the position of the Big Head sculpture via vague hints and Google Maps and I was successful2.

This massive cement head poking out of the ground can be found about a hundred yards away in the woods on the north side of Highway 71 east of De Queen. You can see it from the road, but there's a path that leads right up to it, beginning in the parking lot of the now-closed Slow Flea Market.

Mabry created his Big Head in 1959 for no apparent reason. He denied doing it for the technical challenge. He denied that Native American tribes or Easter Islanders had any influence. He only explained that he wanted to "convey a sense of massiveness through the use of planes and angles." The fact that it is SOLID REINFORCED CONCRETE also contributes to its massive appearance. The piece is advertised as being more than seventeen feet long, but the above-ground portion is only sixteen feet, six inches long. The work is commonly referred to as "Easter Island Head" in the literature, but Harold referred to it in print as "Big Head" or "Male Head," because a second (female) head was planned to be set at right angles to this one.

Several small models of the Seven-inch Prototypes of Harold Mabry's Sculpture pair of heads were made, and when seen together, it's clear that they weren't based on the heads on Easter Island. One could compared the female to the classic gray space alien of modern folklore, which was somewhat ahead of its time in 1959.

Harold Mabry worked as a sign painter. He had only a few classes at the local junior college for formal art training. As promotional giveaways for the Horatio State Bank, he illustrated several calendars and printed watercolors on local subjects. Some residents of De Queen agreed that Harold was an eccentric genius, but when asked for specific examples of eccentric behavior or evidence of genius, his neighbors provided none. I saw talent but not genius, and in Arkansas, eccentric could mean almost anything. According to Billy Ray McKelvy, editor of the De Queen Bee Daily Citizen, Harold's first comment to him at their first meeting was, "I ain't no damn genius." When I asked Steve about it, he said his father was not unusual. He didn't care whether or not people understood what he was doing, so he never took the time to explain himself to his neighbors. Ten people would probably get ten different answers if they asked him why he made The Big Giant Head.